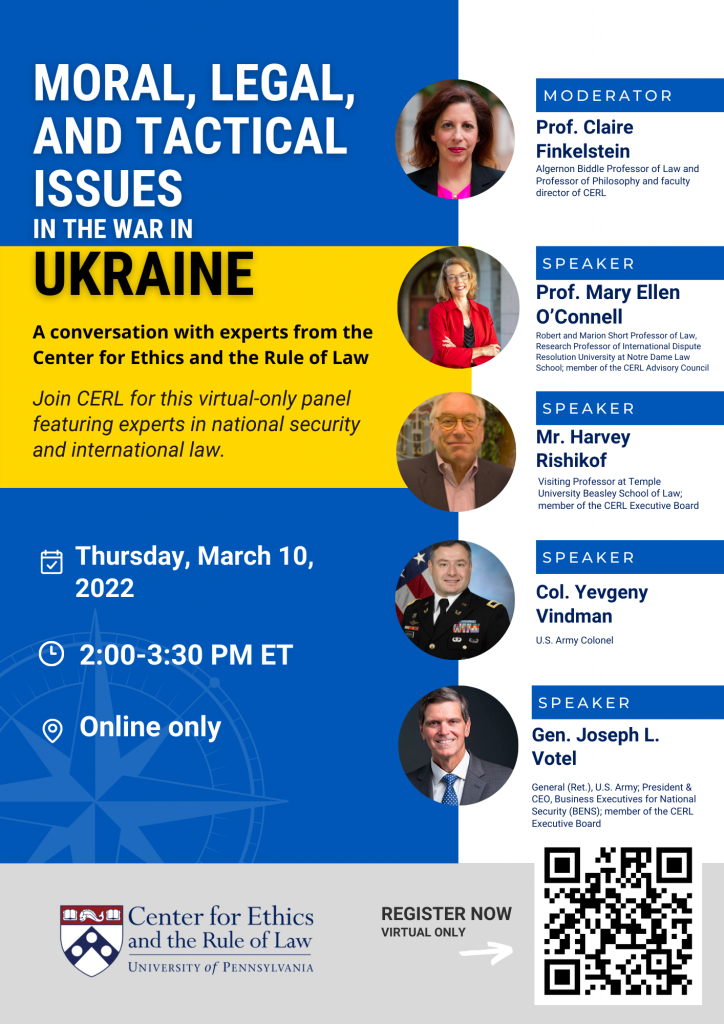 Moral, legal, and tactical issues in the war in Ukraine

Professor Claire Finkelstein (@COFinkelstein) is the Algernon Biddle Professor of Law and Professor of Philosophy at the University of Pennsylvania Carey School of Law. She is the founder and academic director of the Center for Ethics and the Rule of Law (CERL), a non-partisan interdisciplinary institute affiliated with the University of Pennsylvania’s Annenberg Public Policy Center (APPC). She is a distinguished research fellow at APPC and a senior fellow at the Foreign Policy Research Institute (FPRI).

Mr. Harvey Rishikof is a Visiting Professor of Law at Temple University Beasley School of Law. He is involved in a number of legal-policy projects sponsored by the MITRE FFRDC, the MacArthur Foundation, the Center for Strategic International Studies, the Hewlett Foundation and the National Academy of Sciences.

Colonel Yevgeny Vindman (@YVindman) previously served as the deputy legal adviser on the White House National Security Council (NSC), where his portfolio included compliance and operational national security legal functions. Prior to the NSC, he served in a variety of roles in the U.S. Army, including senior labor-employment policy adviser at the Pentagon, senior prosecutor for Fort Hood, and operational law attorney for U.S. Forces-Iraq.

General Joseph L. Votel is a retired U.S. Army Four-Star officer and most recently the Commander of the U.S. Central Command – responsible for U.S. and coalition military operations in the Middle East, Levant and Central and South Asia. During his 39 years in the military, he commanded special operations and conventional military forces at every level. His career included combat in Panama, Afghanistan and Iraq. Notably, he led a 79-member coalition that successfully liberated Iraq and Syria from the Islamic State Caliphate. He preceded his assignment at CENTCOM with service as the Commander of U.S. Special Operations Command and the Joint Special Operations Command.

Share Moral, legal, and tactical issues in the war in Ukraine on: